We all pitched in and cleaned our little rental house, packed up the van and headed off for a day trip of sightseeing on our way to Calgary.  First up –

in Red Deer.  Tim Hortons Inc. is a Canadian multinational fast food restaurant known for its coffee and donuts.  Breakfast sandwiches for the ladies and donuts for the kids and their daddy.

We weren’t too far into the trip when Jeffry confiscated my phone with my 136 songs because he determined that I was singing too loud.  Jeffry doesn’t have much of a poker face, so it wasn’t all that difficult to figure out who took the phone!

He did make up for the theft by tuning the radio to the Beatles channel.  Sightseeing beautiful Canada AND the Beatles – nothing better!  First stop …

LAKE LOUISE and Mount Michener, with a 2,545 m (8,350 ft) peak, is a mountain on the eastern border of the Canadian Rockies in Alberta, Canada. It forms the northerly part of the Ram Range. The mountain sits on the shore of Abraham Lake.  The waters are a light Tiffany green-blue.  I have never seen that color water before.  Pretty amazing.  Photos do not do it justice.  As the melt water from a glacier that feeds a lake starts to flow in the spring time it carries with it glacier silt or rock flour. The silt is created when rocks underneath the surface of the ice are grinding from the movement of the glacier. The rock flour is very light and stays suspended in the lake water for a long time. The sunlight that reflects off this rock flour is what gives the lakes their spectacular turquoise blue or green colour.

Note:  Kerri is the only one who doesn’t look like a crazy tourist.  She’s a Canadian. 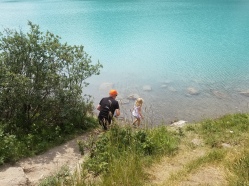 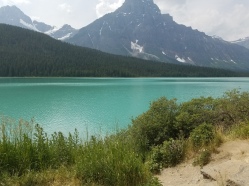 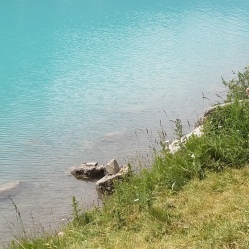 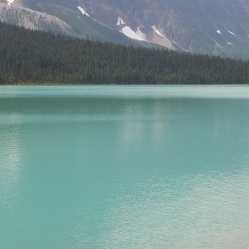 Look at the view from The Fairmont Chateau Lake Louise, a Fairmont hotel on the eastern shore of Lake Louise, near Banff, Alberta. The original hotel was gradually developed at the turn of the 20th century by the Canadian Pacific Railway and was thus “kin” to its predecessors, the Banff Springs Hotel and the Château Frontenac. The hotel’s wooden Rattenbury Wing was destroyed by fire on 3 July 1924, and was replaced by the current Barrot Wing one year later. The Painter Wing, built in 1913, is the oldest existing portion of the hotel. The Mount Temple Wing, opened in 2004, is the most recent wing and features modern function facilities; these include the Mount Temple Ballroom.  The hotel was first conceived by the railway at the end of the 19th century, as a vacation destination to lure moneyed travelers into taking trains and heading West. By the time airplanes and automobiles had displaced the trains, it had gained sufficient renown to have a life of its own. In 1999, Canadian Pacific Hotels (a division of the Canadian Pacific Railway) acquired Fairmont Hotels and Resorts, and adopted the Fairmont name for all of its hotels, resulting in the Chateau Lake Louise being operated as a Fairmont hotel.  Rate is from $1199.00 CAD per room, per night based on double occupancy.  Offer is available for one or two bedroom suite bookings.

Oh yeah!  We will definitely stay there next trip.

Of course, we found our way to a cute shopping area near Lake Louise for a few souvenirs and some lunch.  Max and Abby were very happy to spend their Canadian dollars. 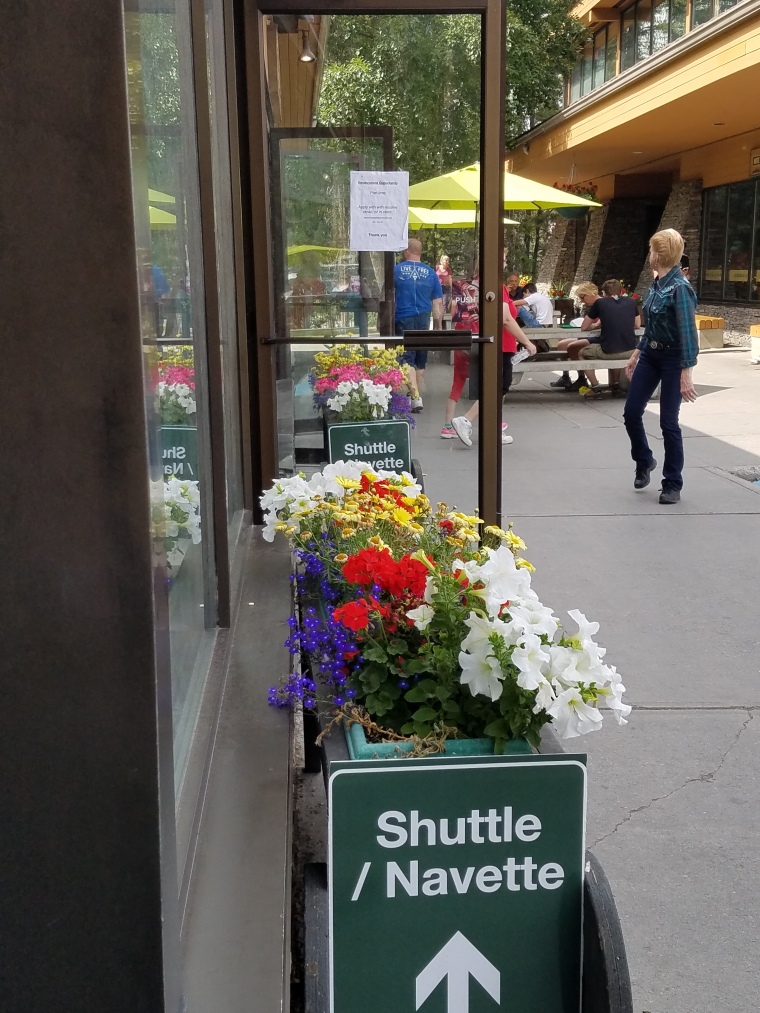 And we are off for more exploration! 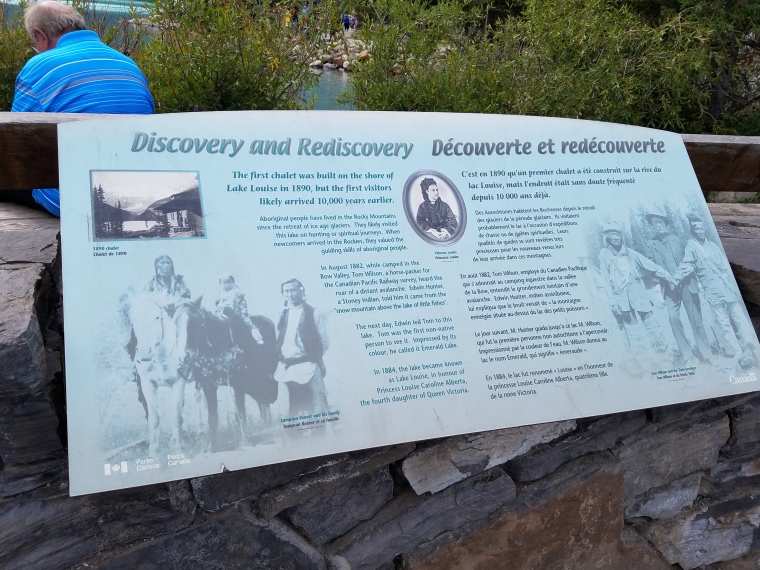 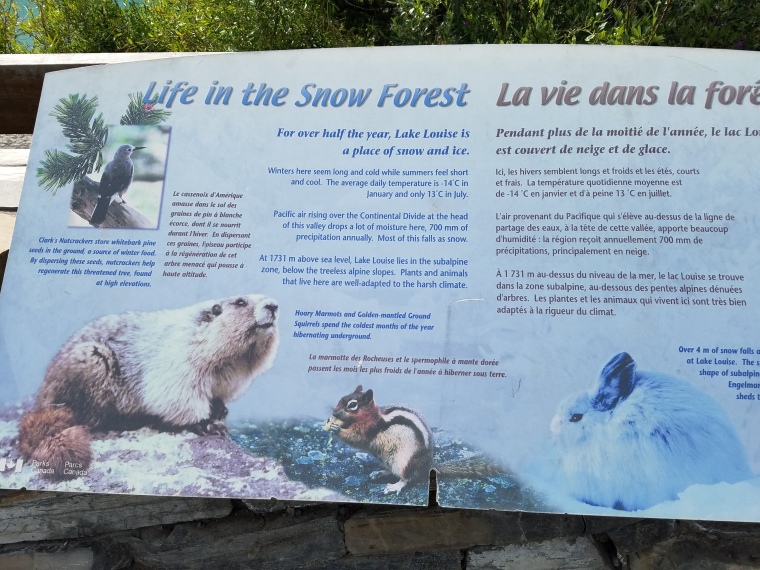 Off we go to Canmore and Best Western!  Beautiful hotel and amazing rooms.  Fireplace.  Walk in shower as big as my house…well, almost.  Reading and work nook.  Very nice.  “Okay, ma’am.  we have upgrades you to an executive room today and the charge is $289.  A little steep, but it is only one night, so go ahead and splurge.”  The little song from Moana is playing in my head “you’re welcome!”

Jeffry’s turn and since he booked way in advance, this should go fast.  “Thanks for waiting sir.  Okay, your standard room with 2 Queen beds will be $499.  Will that be check or charge?”  I watch the color drain from Jeffry’s face and I am wondering if he will pass out right here in the lobby.  A few seconds pass and he calmly says “that cannot possibly be right”.  Um, unfortunately it was.  After an hour on the phone with the booking company it was finally reduced to the same price as mine.  Whew.  For that price per room, they had better bathe me in bubbles, do my hair, mani-pedi and give me a new outfit with shoes and purse to match!

Tomorrow we hit Calgary – with some fun in between.