I really do enjoy the swim meets  There’s something about the smell of sunscreen and pizza and hot dogs.  Brightly colored canopies and sun shelters dot the area, housing swimmers playing card games and snacking on strawberries and cucumber slices.  Giggles are abundant and amidst all of the chaos, relays and medleys kick off the evening activities.  Jeffry and Kerri always put in more than their required volunteer time – Jeffry manning the concession stand at home meets as a fundraiser for the Indian Ridge Swim Team.  Kerri is on her feet for three and four hours at a time, donning an old favorite hat of her late father in law, and rounding up six to ten year old kids of every size and shape and color, all in navy blue swim attire,  and lining them up for their events.

The afternoons are hot.  The atmosphere is hectic.  The announcements and the kids are loud.  And it is 100% fulfilling.  It lifts my soul, no matter how tired and sweaty I feel.

I noticed a growing phenomenon a couple of years ago when Max joined the Indian Ridge Swim Team. 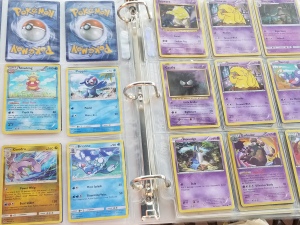 It seemed that practices and meets were not just about swimming;  and not just about winning. There is a camaraderie among Pokemon collectors who gather at these pools;  so much so that every practice is dotted with Pokemon cards laying on beach towels;  on the concrete and on tables under the ramada.   Everywhere you look –  Pokemon.

I thought it only my duty as a Nana to delve deeper into the details of these strange beings called Pokemon.  So, I listen – and pay attention to the games and the most important activity – trading.  The wheeling and dealing that  goes on is hypnotizing.   These children who couldn’t tell you where they left their socks  that they literally had just taken off  –  have memorized every name of the 807 characters  and what their powers are and any other statistic, for when they need to discuss.  The young traders rattle off names such as Empoleon and Phantump  and Zygarde like they are speaking if John or Sally.

I was told today by a young man to “alert” him to any of the cards that had these numbers; these codes in the right hand corner,  in red.  I asked him to explain the importance of the red writing versus the black writing.   Turns out, there isn’t any significant difference in value (according to him).  He just really, really likes the color red.

It is interesting to watch young swimmer/collectors file in through the gate with a handful of cards with dog-eared edges from the wear, pouring out of their pockets. Some kids walk in with small containers of cards and then there’s Max,  who has a ginormous 4 inch binder weighing in at 5 pounds or so.  On more than a couple of occasions, I hear Abigail informing other children that her brother, Maxwell, is a “master collector” to which the reply is always an enthusiastic “I KNOW!”  Seems like he is building his own brand.  Hmm.

There is something else that I have learned.  There is an unspoken, quiet honor among young Pokemon Traders and Collectors.   Books are left open and unattended as the kids are called to their practice or event.  Kids waiting for their practice sit atop one of the tables, turning the plastic pages one by one and commenting on this or that feature of the Pokemon character, sometimes removing the card from the sleeve to look at it more closely, and always placing it back in its rightful sleeve among the other treasures, bestowing the dignity of which it is apparently deserved.  A white-gloved formally dressed Marine could not have done better.

I have not personally witnessed any violence over the game – only some tearful irritation from Ginny stating that she used to have three Pokemon but Abby took one and hid it and now she only has two – dotted by a few sniffles between words.  I believe I curbed any violence by ordering Abby to give Ginny the card in question.  Fanaticism?  Not really.  Make no mistake, there is an enthusiasm among these youthful swimmers.  But when coach Jenny sounds her signature whistle (not from plastic – just from Jenny), the cards are dropped, collector notebooks left open and the kids are off to swim.  I think it is healthy and it amuses me to watch the carefully thought out transactions.
I mean, if they can spout off the names and powers of hundreds of Pokemon, they certainly should have no trouble learning the scientific names for minerals in a few years.  Am I right?